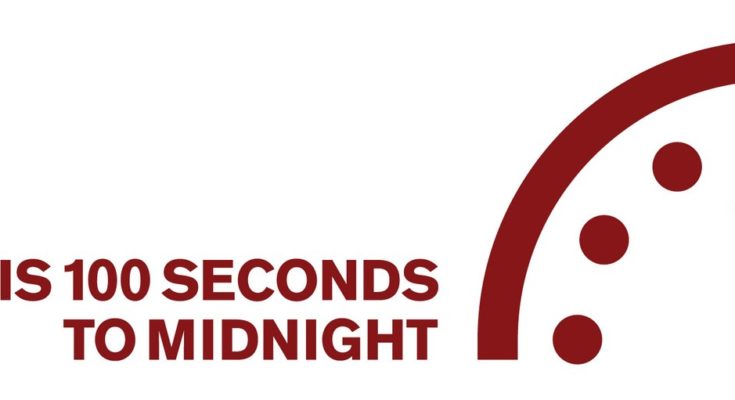 The Bulletin of the Atomic Scientists are planning to move the countdown on the Doomsday Clock from 2 minutes to midnight to 100 seconds to midnight today.

The Doomsday Clock is a Cold War era fear mongering tactic that allegedly counts down to man-made catastrophe. This clock doesn’t necessarily indicate that we are any closer to a global apocalypse, but it’s a great way to push a partisan agenda.

With that said, here are five RPGs that you should check out just in case the Doomsday Clock is onto something and humanity is doomed:

These  monster-collecting JRPGs deal with a world twenty minutes into the future where VR headsets are finally affordable. In both games, you raise Digimon to take on enemy hackers, malicious computer programs, and misguided Digimon.

I’ve got a great article about what to expect from Digimon Story: Cyber Sleuth.

Originally released for the WiiU, this game can be described as a softer version of a Shin Megami Tensei game. If  you liked Persona 5, then this game will be right up your alley, as the story hits some of the same notes. The idol premise keeps it from ever being too somber, which might be refreshing if we are on the countdown to annihilation.

One of the side missions in the game has you fetching ingredients for a hangover remedy for your boss. Rest assured, this game doesn’t take itself too seriously.

This game is almost old enough to buy alcohol in the United States, and admittedly it looks pretty rough. However, the plot is amazing and JC Denton is the most unintentionally hilarious character in a dystopian videogame.

This game is available for a pittance on most sites.  I recommend checking out the mod scene for Deus Ex, as some of them add a lot to the overall experience. Protip: Don’t level up swimming.

This quirky SNES RPG sports an interesting plot, excellent music, and memorable characters. You won’t get the scratch-and-sniff swag that came with the original game, but you’ll get an incredible experience. Make sure to massacre some New Age Retro Hippies for me.

This is the part of the article where we would recommend Fire Emblem, but we aren’t Nintendo. Sorry.

If you’ve been on the fence about heading into the Galar region, wait no longer! The upcoming DLC will add even more content and restore some of the Pokemon that didn’t make the cut into the vanilla game. I’m hoping that Nidoking gets a new Galarian form.

5 tips to get you started in Pokemon Sword and Shield

Is time running out?

Hopefully the world isn’t in dire straits and this hubbub about the Doomsday Clock is just talk. In the event that it isn’t, or if Coronovirus is the next epidemic, I’d recommend holing up in your apartment and getting comfy with these RPGs before the Doomsday Clock counts down.