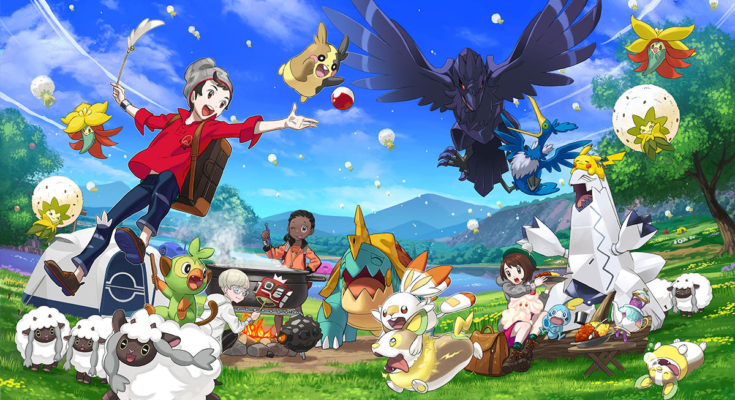 We’re just over a month into the release of the newest mainline entries in the Pokemon series, which have made some huge changes to the gameplay loop without compromising the integral monster catching experience. In this article, I’d like to share some of the insights I gathered while trundling through Galar for the first time. Fair warning, trainers, spoilers do lurk in the tall grass ahead!

Sword and Shield thrust you into the Wild Area early into the story. The Wild Area takes the place of the Safari Zone or National Park in previous games, and serves as a way to connect different cities within the game. It functions as a natural ecosystem where Pokemon flourish in their own biomes and is visually reminiscent of hugely populated zones in games like Xenoblade Chronicles 2 or hack-and-slash CRPGs. Previous titles in the series would feature Pokedex entries that remarked on the interactions between different species, and in Sword and Shield you really get a glimpse of how the critters might act in their normal habitat.

Be advised, the games do gatekeep you from catching higher level spawns early on, but the raid system easily allows you to reach high levels before setting foot inside the first gym. During my first foray into the Wild Area, I got lost on the way to Motostoke and ended up bouncing from raid to raid. Every time I scavenged watts from a new den, I would see another Pokemon that I wanted to add to my team. Between experience candy and savvy leveling, I ended up with a full team of mid to fully evolved Pokemon in a level range of 25-40 before challenging Milo and easily taking the Grass Badge off his hands.

Contrarily, you can choose to speed through the Wild Area and hold off on challenging any raids until later in the game if you would like more of a challenge. If at any point you feel as though you can’t keep up with the storyline battles, there’s nothing to prevent you from racking up some experience in the Wild Area to bolster your team.

Sword and Shield practically drops items into your lap. If you casually do raid battles, you’ll find yourself swimming in EXP candies, Technical Records (TRs), treasure items, and berries. The treasure items (and arguably some of the Technical Records) are mostly vendor trash that can be sold for easy cash. At one point I had 18 copies of TR19, Tri Attack, and sold all but one for a healthy payoff. You might as well sell moves that have poor distribution or aren’t stellar to begin with. While I appreciate that the game wants me to think ahead, I’m hardly going to use one copy of my Future Sight TR, much less 10 of them.

The Wild Area is also rife with free items that are literally on the ground for you to pick up, which contributes nicely to the Pokeball/vitamin fund. Incidentally, you don’t need to be stingy with your watts. I would highly recommend trading your watts to the various NPCs that you meet in the Wild Area, as even the low end rewards such as Pearls or small EXP candies can be easily monetized or used.

The Galar region breaks with the tradition of certain Pokemon being locked behind trade evolutions. If you’ve played the series for any length of time, you’re probably familiar with the frustration that comes with having a Kadabra or Graveler you can’t evolve. Sword and Shield has fully evolved trade evolutions just waltzing around for the taking…if you’re strong enough to catch them!

Nearly every trade evolution can be found as a regular spawn, but keep in mind that eventually you’re going to want the special Gigantamax versions of certain monsters like Gengar or Machamp. Notably, certain trade evolutions like Rhyperior or Accelgor can be found in Max Raids instead of necessitating a trade.

4) You don’t have to dump your initial team

I think the Pokemon Company/Game Freak has realized that some people get genuinely attached to their pixelated pets. I’ve never been the type of person who would transfer Pokemon from game to game, but I can appreciate the sentiment that can develop from using the same Pokemon for most of your journey. I’m going to assume that you already know about IVs, EVs, and natures but if not, here’s a quick primer:

Individual Values (IVs) are the genetics that your Pokemon is born with. These range from 0-31, with 31 being the highest. A higher score means a higher stat.

Effort Values (EVs) are the points you earn towards improving a stat. Four effort values equal one stat point, to a maximum of 510 EVs total, with a maximum of 255 EVs in a single stat. Most competitive builds focus on 252 EVs in two stats, and 6 EVs in another stat.

Abilities are special bonuses (or maluses) germane to your Pokemon’s species. Certain Pokemon have multiple possible abilities, one of which may be hidden.

In the past, the only controllable factor here was the EVs. However, the developers have introduced several items into the game to make the process of teambuilding less taxing. You can now pick up nearly any Pokemon and make it competitively viable if you’re willing to put the resources into it.

Bottlecaps and Gold Bottlecaps can be used once a Pokemon is level 100 through Hyper Training at the Battle Tower. These items will artificially raise a Pokemon’s IV to its maximum, however, these artificially boosted IVs will not carry over to that Pokemon’s offspring if you choose to breed it. Think of it as plastic surgery – your kids aren’t going to be born with your perfect nose.

Vitamins can be bought at Wyndon, cost 10k Pokedollars, and give 10 Effort Values. These can be used to quickly max out a  Pokemon’s EVs in a certain stat. If you have the opposite problem in that you’ve picked up too many EVs that you don’t want, you can remove those EVs using certain berries, such as the Tamato or Kelpsy berries. You can also find feathers on the bridges throughout the Galar region that give one EV to a specified stat, allowing you to fine-tune your Pokemon even further.

If you don’t like your Pokemon’s Ability, you can use an Ability Capsule to change its ability. You’re going to want to do the legwork on this one: certain abilities cannot be changed, and you cannot change from a regular to a hidden ability. Ability Capsules are quite expensive, costing 50 Battle Points (BP, earned at the Battle Tower).

5) Dynamaxing and Gigantamaxing – give me the TL;DR

Any Pokemon can Dynamax, but only very rare individuals can Gigantamax. The game will give you a few free Pokemon that can Gigantamax: Meowth, Pikachu, Eevee (the latter two require save data from their respective Let’s Go! Games).

Otherwise, you’ll need to defeat and capture rare Gigantamax variants of certain species in the wild. Some of these battles are a definite challenge, but the resulting Pokemon is definitely worth the effort, as every Gigantamax Pokemon has an exclusive G-Max move that it can use that may have an amazing effect in battle.

Tying it all together and sticking an Effort Ribbon on it

All of this information may seem like a lot to take in, but Sword and Shield are quite possibly the most forgiving titles in the series so far, and really promote the practice of picking and sticking with Pokemon that you jive with. Don’t be afraid to experiment, as the quality of life changes that Game Freak have implemented will allow you to customize your Pokemon experience in a way that hasn’t been possible so far in a Pokemon game.

Author’s note: None of the titles on this list were sponsored, and all titles were purchased at the author’s expense.