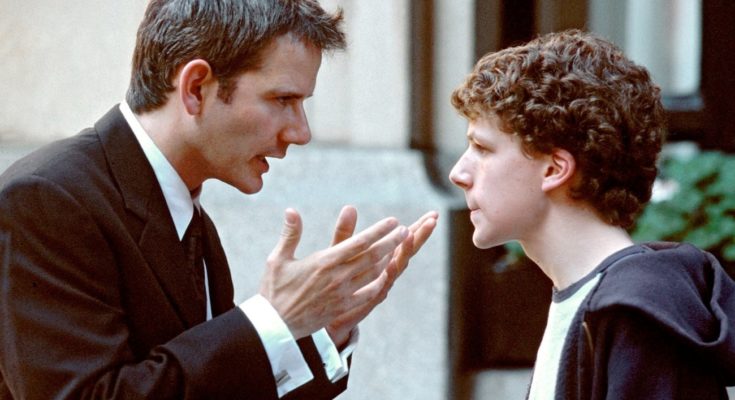 Roger Dodger (2002) is a rather uncomfortable film due to it’s narrative, and shaky camera techniques used by dir. Dylan Kidd.

Campbell Scott takes on the role of Roger Swanson, a pseudo-intellectual+ man that feels the need to over explain every situation that the man can get his hands on. He spends his time making women feel miserable about themselves only so he can feel better about himself, hiding in a shallow shell of his own mind. Roger is an advertising executive and explains that he needs consumers to buy said products so they can be happy and feel less miserable about themselves.

The film carries on by showing us similar situations of Swanson over explaining things to the point where it makes women uncomfortable. He discusses with a woman why she’s deciding to sleep with the boss of her company (after pointing out that every woman has already done this), another time being he sits at the same bar talking to a newly-wed woman and elaborates on her flaws and why she is getting married –  to the point that he’s kicked out.  Roger had just been dumped by his boss, Joyce whom makes him feel quite miserable in her own speech as to why they are splitting apart and not indulging in social activities any longer.

It’s pretty clear that Roger Swanson is a very uncomfortable and lonely man. We can see it in his persona just for the first twenty minutes or so. He’s sexually deprived using alcohol as a coping mechanism. Swanson’s characteristics make it obvious to it’s audience that the man could be a true lover if he really wanted to; the charisma is there from the start. It’s the constant intellectualism that gets in the way of himself and a woman, leading his actions not to come off smart to women, but more like an asshole.

Shortly after, he is accompanied by Nick (Jesse Eisenberg) his nephew that he doesn’t see very often, and he is on the search for the mojo of talking to women. Swanson promises Nick that he’ll be able to give him good advice and help him get on track.

They later on proceed to go to a bar in which to practice these efforts previously discussed between the two. They meet two women, Sophia (Jennifer Beals) and Andrea (Elizabeth Berkley). They discuss a multitude of things at the table where they put back numerous drinks, later on moving to a small park where Nick is informed of the women’s sexual encounters finally being able to get a glimpse of what the sexual world really has in store for him. Nick is constantly the one asked questions by the two women, while Swansons stands there practically shitting out nonsense in hopes that the two women will draw their attention to him instead.

Immediately after this, Swanson and Nick go to the party at Joyce’s place that Swanson was so upset about not being invited to. Funny enough when Joyce realizes she’s there it’s not a bother, only when Swanson causes a scene (as she might have expected him to). Nick meets a woman named Donna, a friend of Roger, and they then begin to chat and have drinks together. Again, Nick has an attempt to have sex with her but doesn’t take the opportunity due to the fact that Donna was too drunk and she just wanted to sleep. Nick is thrown out of the party for taking shots at the age difference between Joyce and her new lover, and Nick follows promptly.

Can you see a theme here in these basic plot points? I’m sure you’ve realized by now that Swanson is nothing but a hack, while Nick has all of the mojo that is really needed.

Once they get kicked out Nick finally tells Swanson he’s upset and he refuses to go home without getting laid. Nick reminds him of the “safe fail” that happens if he doesn’t get the golden opportunity, in which that safe fail is just a sex club for Nick and Roger to go to. Nick meets a girl there, offering one hundred bucks to have sex with her; he coughs up the money. They don’t get too far into the acts with Nick being a complete nervous wreck (let’s be reasonable, everyone’s first time is kind of a mess) and Roger for some reason pulling Nick out of the situation, getting into a feud with the sex worker accompanied by Nick.  The film’s got about 15 minutes left at this point, but I think we have what we really need to know at this point.

So, what’s the main gist of Roger Dodger?

It’s a film that really focuses on the dynamic of men in the modern age of dating and sex-life. It portrays Nick, an innocent young man who is passionate about learning and academia while trying to be himself at the same time. On the other hand we have Roger, an insecure pathetic older male who acts exactly as the words “love tutor” would imply to someone. It’s unique and messy camera style provides a glimpse of intensity and offer how personal a subject like sex can be. By no means is this as uncomfortable as Lars von Trier film or anything, of course not, but it’s got some uncomfortable moments in it. The sheer point that Roger is helping his own nephew seduce women in the big city of New York states enough for the audience to realize what kind of man he is.

Watch a lot of movies, drink a lot of coffee.