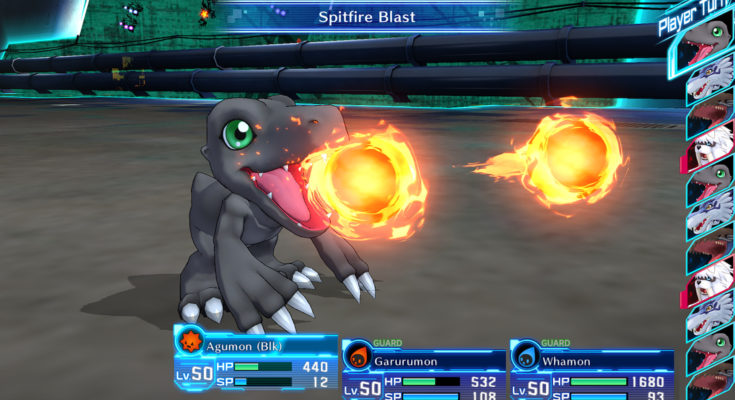 Want to be the internet’s greatest detective? Consider investigating the Digimon Story: Cyber Sleuth Complete Edition, which is a bundle of two games: Digimon Story Cyber Sleuth and its sidequel Cyber Sleuth – Hacker’s Memory. The games occur at the same time, but from the perspectives of different characters. The plot diverges considerably towards the latter half of each game and takes a character-driven path that ends on a conclusive, if somewhat bittersweet note.

In the Digimon Story: Cyber Sleuth setting, Digimon are used as specific programs by netizens in a cyberspace known as “Eden.” It’s the logical extension of imagining that your firewall is actually a sentient creature fighting off malevolent malware. Eventually, anomalies in Eden cause the boundaries between the physical world and Digital World to wear thin, wreaking havoc.

The incursions of Digimon into the real world and humans into the Digital World are a big part of what drives the story. You get the pleasure of seeing both sides of this conflict, as both the Digimon and humans are divided as to whether they should accept the encroachment of the other.  If you’re a fan of narratives that examine the dichotomy between our physical and digital lives, urban fantasy, schlepping through Tokyo, Japanese RPGs, or the Digimon franchise, then you should consider trying this one out.

Not quite ready to play vigilante? Here are a few similar works that explore related concepts and plots:

In both games, you start off as a fledgling detective (Cyber Sleuth) or hacker (Hacker’s Memory). You build a reputation by completing cases (Cyber Sleuth) or hacking jobs (Hacker’s Memory). Many of the cases are routine affairs, but some of the more memorable cases deal with salient and poignant issues that plague us in the real world. These issues include topics like identity theft, bullying, peer pressure, and mental illness.

The games enjoy presenting the player with various ethical quandaries that are germane to the setting, such as whether the Digimon in question should be afforded the privileges of personhood, or the difficulty associated with maintaining multiple identities both in person and online.

When you aren’t actively completing quests, the real meat of the game is in the teambuilding and Digimon-rearing aspects. Owing to their origins as packets of ones and zeroes, the Digimon are incredibly versatile. Through the process of Digivolution, which induces a transformation that can make a Digimon either grow stronger or regress to an earlier form, you can eventually change any Digimon into another.  For fans of the series, this means that yes, you can Digivolve that Wormmon into a Wargreymon if you choose the proper Digivolution route.

The games make it rather easy to grind levels, obtain resources, and reach Digivolution milestones, and I found in my multiple playthroughs of each game that the main factor that held me back from fielding a team of endgame-level Digimon was the restriction on party size. Each Digimon consists of a certain amount of memory, and larger or more powerful Digimon take up more space commensurately. This restriction is gradually lifted throughout the game as you collect memory expansions, and eventually becomes a non-issue altogether.

When Cyber Sleuth was originally released, certain Digimon were locked behind early-access downloadable content. Additionally, many powerful and popular Digimon were gated behind postgame quests. This made it difficult to actually enjoy using some of these monsters until after you were done with most of the game. Fortunately, Bandai Namco has made a few changes that have drastically improved the player experience: all of the Digimon are now included in the game, and both games can access the full roster, including the Digimon that were later added in Hacker’s Memory (though there are a few that have quest or item requirements).

You can also freely transfer your Digimon back and forth between games once you have completed the main storyline in both titles, further reducing the grind. Unlike Pokemon, there are no Digimon that require events, trading, or other means to obtain, which is refreshing. There are no restrictions on when you can save, and the game is very easy to pick up and play for any length of time. The bundle is available physically or digitally on the Nintendo Switch, and digitally for PC via Steam. It usually retails for $49.99, but is currently on sale for $34.99 on the Nintendo US eShop until 12/30/2019. The original games were also available on the PS4 and Vita, but it appears at this time that the first title has been delisted from the Playstation Store.

Author’s note: None of the titles on this list were sponsored, and all titles were purchased at the author’s expense.