The ‘YouTube bad guy’ is now bringing the pain to the gaming world, and he’s taking no prisoners.

Starting back in late 2019, sneaker and fitness content creator DammnDee engaged in a new endeavor. After much success on his sneaker channel and starting his own personal fitness business, it was time for a new challenge.  Dee’s always been a fan of video games since the days of the 8-bit era. Thus, with the technological advances now available, he decided to start streaming games on YouTube. For Dee, the success of his other two channels has helped with the growth of his gaming channel.

Those learning experiences that helped him achieve those successes are worth gold in today’s online world. It’s not just that, though. Dee has many supporters that truly enjoy his content. Some might feel that his content is ‘too spicy’ and that might be true, but you’ve got to give credit where it’s due. You have to stick to what works for you and for Dee, being the ‘YouTube bad guy’ is well worth it.

Now, it’s not like he’s that way all the time because he wants to ruffle some feathers. Dee is very outspoken. He likes to speak his mind and he’s not afraid to address the elephant in the room. Some people are turned off by this behavior and that’s fine, however, his content is not for the weak of heart.

Like our friend Nxtgen720, this type of entertainment will keep you at the edge of your seat. You want to be there because you never know when things will go left. You also never know when Dee will ‘rage’ and start ranting like a madman. It’s hilarious, especially for the facial and high-pitched expressions he’s known for. Dee’s a master troll, so to see him enter a new environment and adjust to it is a lot of fun to watch.

MY 1ST 20 KILL GAME ON CALL OF DUTY MODERN WARFARE

GBL has been part of DammnDee’s gaming community since the outset of his channel. We remember how new all this felt to him. Dee hadn’t been as involved in video games as he might’ve been when he was younger. I vividly remember the first day he got Call of Duty: Modern Warfare on PS4. Needless to say, he was a ‘noob’. Then again, everyone’s been one at some point or another.

Back then, there were just a few of us who would regularly join his stream. Regulars such as The Soulmates, JAYtheDRIPPA, KannapolisMadeDevinParks, Julian, Mr. LockItUp, Will Too Real Washington, JusVonKillington and HAWK EYES28. Each of us has helped add something of value to the community and have seen the channel grow to where it’s at now. Since we’ve been there since day one, we’re now seen as OG’s of the community. As I speak for myself, I’m sure others would agree: we’re glad to have been able to help Dee in any way we could.

Remember how we told you that Dee was a ‘noob’. Yea, he’s gotten A LOT better since, and rightfully so. Like I said before, you have to give credit where it’s due. Dee has put in a lot of work into improving his skills as a gamer. He’ll stream nearly every day for at least 3 hours, per stream. Sometimes, he’ll even stream multiple times per day. That’s how invested he is and it’s something he should be proud of. The community has grown and there are always new people interacting with him in the live chat. We’re certainly proud of his development and expect him to continue to grow as a gamer. We’ll see you online, homie.

Check out one of his latest ‘W’ in Call of Duty: Warzone below. Rambo DammnDee is in the building! 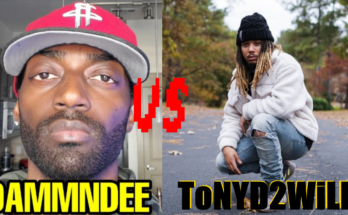