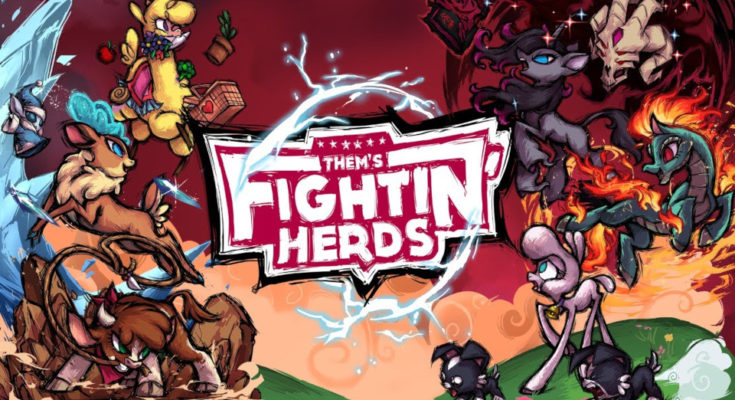 The news surrounding EVO Online 2020 reached all over the world. A lot of people expressed their concerns around most of the major titles of the community not having a stable online to be used for an event as important as EVO. Games like Grandblue Fantasy Versus, Tekken 7, or even Street Fighter V, while being eagerly anticipated by fighting game fans, have huge issues on how their netcode is handled.

EVO acknowledged it, and they made big, unprecedented moves with their new line-up. For their first online event, the only games that will have an open tournament are four games that weren’t scheduled to be featured at this year’s EVO. This article will focus on one of them: Them’s Fightin’ Herds. The story around how this game came to be is fascinating, and we wanted to bring some spotlight to it.

“I used to wonder what Friendship could be”.

Them’s Fightin’ Herds is made by ManeSix. A development team that started working on a fan project. They had almost no experience in coding and animation, but they were able to learn and make a playable demo of a fan-made fighting game, in the universe of a phenomenon at the time; My Little Pony: Friendship is Magic.

The game was simply called Fighting is Magic. Back then, the fandom grew at a very impressive rate. A lot of people were eager to play the game for the first time. Funny enough, a lot of Bronies were far from being fighting game fans, and the fan game was even able to appeal FGC members that weren’t a fan of the series in the first place.

During the fan-games’ development in 2013, EVO started its Donation Drive. A charity event benefiting the Breast Cancer Foundation. The goal of that campaign was to make fans vote on the eighth game to be present at EVO as a sanctioned tournament. This set up the winner of that contest, Super Smash Bros. Melee, to be held for 6 EVOs in a row. Before the winner was announced, 8 games were listed. With them, Skullgirls, Super Street Fighter II Turbo, and surprisingly, Fighting is Magic.

The game had an impressively growing popularity. The Bronies were massively turning towards the event to leave their mark on the global fighting game event. So much so, that during the first three days of the drive, Fighting is Magic lead the campaign, being the first game reaching more than a thousand dollars in donations.

This drew a lot of attention on ManeSix, which declined the offer, saying that their game was far from ready for EVO 2013. It didn’t stop people from giving money to represent the game, but by the end of the drive, people out-numbered the donation made for Fighting is Magic. The drive became an arm-race between Melee and Skullgirls. And Melee won, by a $15,000 margin.

The attention didn’t help ManeSix. Shortly after the end of the drive, Hasbro, the legal owners of the My Little Pony franchise, stepped in and sent a Cease-and-Desist claim to ManeSix, leaving them no choice but to stop the development of Fighting is Magic. It was a shock, not only for the My Little Pony fandom but also for a significant part of the FGC as they disliked the actions of a billion-dollar company shutting down a harmless fan project.

Back during EVO 2013, an early demo was leaked. Going from that leak, a marginal part of the community decided to take the matter on their own hands, and finish where ManeSix started. Outside of fan mods, like Fighting is Magic – Tribute Edition, nobody expected ManeSix to go back to the project, but it was far from over.

Another game was massively voted on during that EVO 2013 Donation Drive, and that was Skullgirls. Later on, LabZero Games used that popularity boost to launch their crowdfunding campaign, originally just made to release one extra character for the game; Squigly. The results of the campaign exceeded all expectations, and they reached their goals in a matter of days.

Then, they had to pull off Stretch Goals, adding more and more characters. One Bonus Stretch Goal made a lot of noise at the time. LabZero Games would let ManeSix use the engine they made for Skullgirls, called the Z Engine, for a fully-fledged fighting game project. That stretch goal was beaten, and ManeSix, who started as friends in fandom, became a real development studio.

Saved by the Floof.

However, just the engine alone isn’t nearly enough to make an entire game. After the big news, they were in hiatus for more than a year, spending time to do research on the engine and to construct what they will do in terms of gameplay mechanics and new characters. They created the movelists of each pony from scratch as they want to use as much as they could, by creating “alternates” of the original ponies they couldn’t use because of copyright issues.

To make the latter, they had a very unexpected reinforcement. The original character designer of the series that started the entire fandom: Lauren Faust. After Hasbro’s C&D over the original fan-made fighting game, Faust contacted ManeSix and offered her help to create a brand new universe for their fighting game. She designed new characters, stories, enemies, and an entire universe, tailor-made for that new fighting game.

The expectations were even higher than for Fighting is Magic. This wasn’t a fan project, anymore. This was a solid video game, backed by a veteran cartoonist who was behind big projects like Codename K.N.D, Powerpuff Girls, DC Super Hero Girls, etc. After that, ManeSix revealed Them’s Fighting Herds as their project’s new name. It had its successful crowdfunding campaign, released as an Early Access game on Steam, and just got out of it during this year.

The story behind the project is nothing short of incredible. Not just the humble beginnings, but everything that led to their current version on Steam. From the EVO spotlight, the huge help by LabZero, to Lauren Faust’s initiative to give the project its universe. It’s like a giant planet alignment.

It’s particularly poetic that Them’s Fightin’ Herds is now an EVO game, considering how they started. It feels like a loop because it’s not just about Rollback Netcode. Just like Skullgirls and Killer Instinct, the people making those games were true members of the FGC, loving and supporting the games we also love and support. This is the kind of fighting game future that EVO may have wanted to showcase.

Without being negative, I’m not a fan of most esports media focusing on the shortcomings of Super Smash Bros. Ultimate for EVO Online 2020 without even caring to dig up this uplifting story. I truly think that it deserves more attention than it’s gotten, and I hope that this article will help.

I’m going to watch EVO Online and support the fantastic TFH scene. At the same time, I kinda hope that this huge spotlight will be used by ManeSix to show us more about the game’s future. The reveal of a certain goat, maybe?