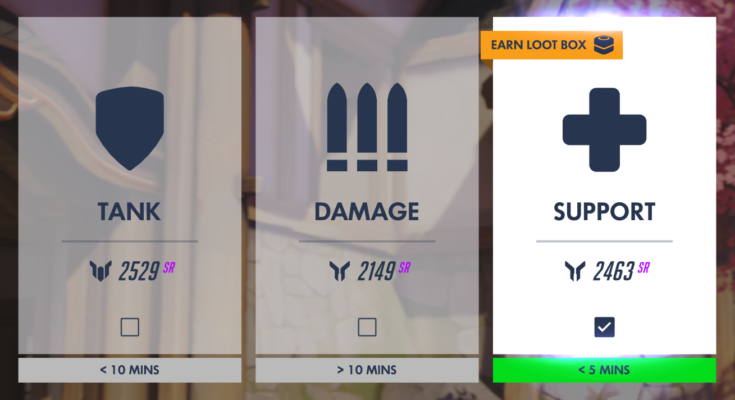 Blizzard is putting more efforts into satisfying player demands with the latest Overwatch content reveals. The most important of these changes is the Role Queue to categorize players into a more defined format, while teasing a new hero elsewhere. Let’s take a look at these two headlines and when you can expect to see them live.

In any game of Overwatch you’ll see warnings in Hero Select that point out missing roles — missing tanks, healers, damage, etc. That doesn’t mean you have to listen to the recommendations and creates issues in competitive matches where players don’t coordinate hero choices. This is changing: Role Queue splits the roster into three different categories: Damage, Support and Tank. If you wish to play a hero in a specific category, you will join a unique queue where you are guaranteed that choice. Teams will have fixed roles: 2 damage dealers, 2 supports and 2 tanks. If you get placed in a Role Queue game, you may only pick from the category of hero you queued for. You’ll see incentives for joining queue for a role currently in demand, such as a loot box.

This means you’ll also be splitting up your ranking: Competitive Play will award points based on your role and you’ll have different ranks in each. This is affecting the highest echelon of play: Overwatch League is adopting the 2-2-2 format starting June 25. This is in the fashion of League Of Legends, which introduced Draft Pick to all playlists and quickly became the favored choice over Blind Pick because of your ability to play a certain lane position. What League doesn’t do is force you into a class though, so Overwatch will have very defined meta picks in each pool. This is diverting from the games that inspire Overwatch and taking advice from highly successful MOBA games. Such changes are only enforced in competitive leagues for games like Team Fortress 2.

Check out the video from the Overwatch team about the changes:

Full details are available on the Overwatch blog. Role Queue is heading live with patch 1.39, which seems to be timed somewhere in the middle of August.

Sigma out is there

So who joins the roster after Baptiste? A post by the official Mexico team for the Overwatch World Cup announced Role Queue was live, and posted a shot of the new profiles. But that image seems to be altered: The label “TEMP ART” covers the bottom and the first hero in the hero stat tracker is “Sigma”.

Jeff Kaplan is also posting some strange videos on the official Overwatch twitter in case you think it’s just a slip-up:

In this quick Developer Update, Game Director Jeff Kaplan goes into detail about the upcoming…

Something’s coming real soon. Will you be getting back into Overwatch?